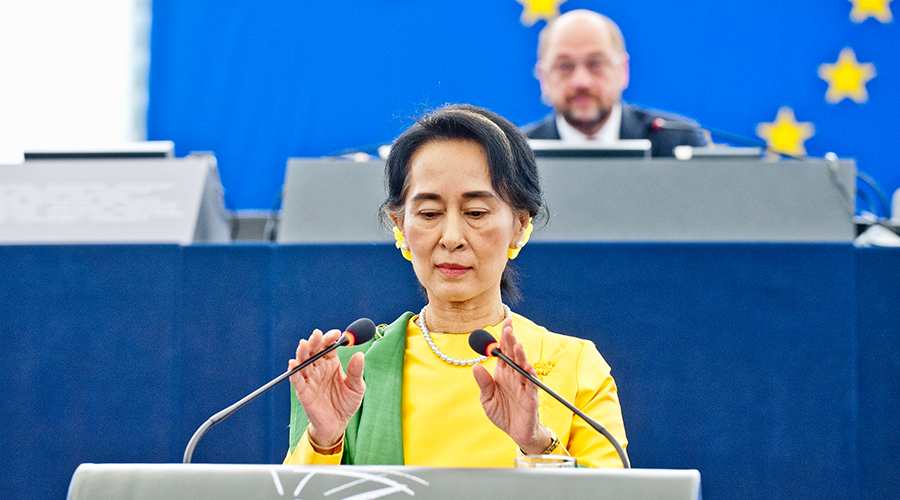 Myanmar’s political history is fraught with accounts of its struggle to establish democratic structures and negotiate between conflicting fractions. Myanmar, as many argue, stands as a successful model of political transition in the region. However, the nature of such transition from military rule to democratic government is under greater scrutiny? There is perceivable disagreement over when and how did the process of transition commenced?. Some believe in the year 2003 the then military government under Sr.Gen. Than Shwe laid the foundation. He promulgated ‘seven step roadmap to disciplined democracy’. In five years time from the announcement of the roadmap, a new constitution was adopted in 2008 through a referendum. Under the new constitution, the first ‘free and fair’ election were held in November 2010 in which the military-backed Union Solidarity and Development Party (USDP) won the contentious polls.

Touted by many as an effective structure, the USDP government soon embarked on wide-ranging reforms. However, in 2015 elections, the USDP lost to Suu Kyi’s National League for Democracy that secured public consent with a thumbing majority, 60 percent of the vote shares and won more than 70 seats in both houses of Parliament. Two of the most compelling irritants in Myanmar’s domestic realm are its crumbling economy, and ethnic clash. Taking over from the USDP, the NLD government pledged to make bold efforts to resolve ethnic clashes between the Rohingyas and Rakhine buddhists. This could be attributed to the exacerbating economic condition and inflow of large population of Rohingyas from Bangladesh and the other neighboring states. On acceding power, Suu Kyi appointed a Central Committee on the Implementation of Peace, Stability and Development of the Rakhine state with the objectives of bringing ‘peace, stability and development to all people in Rakhine state’.

In the recent past, the NLD government has been grounded in renewed tensions between the Rakhine Buddhists and the Rohingyas. This time around, the conflict ensued with the killings of nine policemen by armed groups suspected to have links with the international terrorists. This offset a dangerous trend, inciting military intervention in a ruthless manner. Over 100,000 are confined to squalid displacement and over 130,000 men, women and children denied basic health care and education. Tens of thousands have fled by boat and many have arranged secret escapades to neighbouring states of Malaysia, Indonesia and Bangladesh. In a ruthless hunt for the perpetrators, the military has inflicted incessant violence on the civilians.

With a long history of tussle between the Rohingya muslim population and the ethnic Rakhine Buddhists prevailing since 2012, certain factors had apprehended smothering of this age-old friction with the coming to power of Aung San Suu Kyi. However, on the contrary, in the face of heightening tensions in the Burmese land, the Myanmar government had out rightly denied reports of human right abuses in Rakhine. Accompanied by a heavy clampdown on media and human right activists, the government forces have failed to suggest that everything is under control to the global onlookers. In such grave situation, the legitimacy and credibility of the newly elected civilian government is dubious, which has amassed wide regional support, including from India.

As revealed through a historical survey, for many ethnic and religious minorities, the transition has been a ‘painful’ process. The UN High Commissioner for Human Rights Zeid Ra’ad Al Hussein propelled the NLD government to formulate concrete steps to put an end to the ‘systemic discrimination and ongoing human rights violations against minorities’. Myanmar is undergoing a rare process of political transition, which is still a work in progress. During this phase, Suu Kyi’s government is confronted with major challenges, let alone the over interference of the military and perennial ethnic clashes.

Being put to test on multiple frontiers, Suu Kyi’s capability to balance contradictory forces will eventually determine Myanmar’s political destiny. Myanmar’s transition towards democracy will only be successful when the top-end leadership accords due respect to universals human right values and democratic principles. While adapting to the specific socio-political environment in this part of the world, leaders needs to highly acknowledge these principles while making key political decisions. It is then that Myanmar’s will tread on the path of democracy and liberal values.