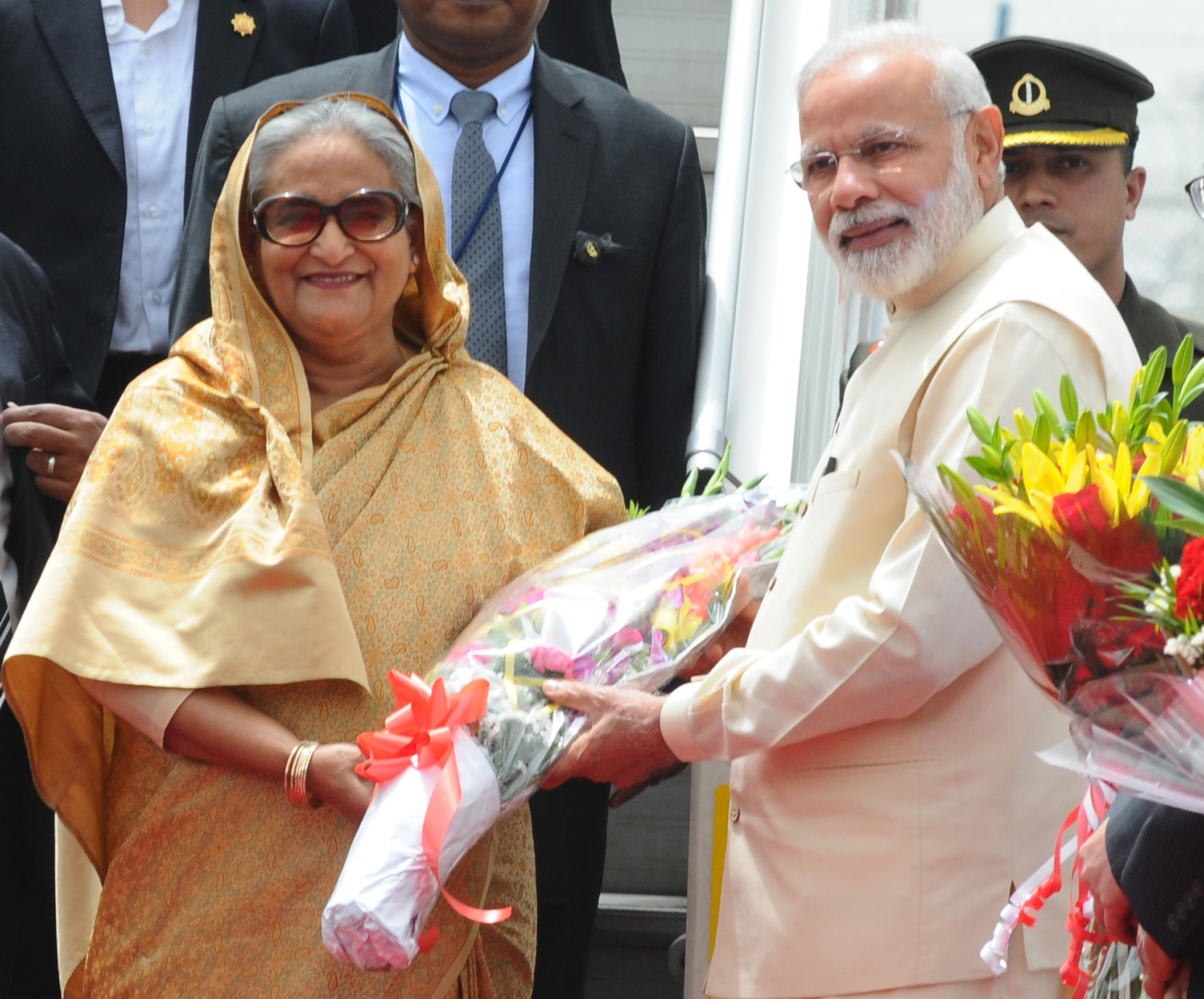 Prime Minister of Bangladesh Sheikh Hasina being received by the Indian Prime Minister Narendra Modi at the Airport on her arrival in India on April 7.

It is beyond doubt that Bangladesh has witnessed momentous growth over the past decade, spawning over diversified arenas: economic, military, security, trade and culture among others. As Bangladesh continues to grow at 6.5%, its increasing ties with regional as well as global players have brought significant global attention. In the backdrop of an aggressive China and unpredictable United States, India’s bonding with its neighboring states could acquire greater prominence than ever. And in this respect, India’s expanding ties with Bangladesh is remarkable.

With the accession of Sheikh Hasina at the helm of affairs, Bangladesh has encountered stability in the domestic realm and increased trade ties with global players. India has extended a historic $2 billion line of credit which is expected to create over 50,000 jobs in Bangladesh. Alongside reaching a conclusion over the Land Boundary Agreement with India in 2015, Bangladesh has forged key partnerships in energy and power sector-600 megawatt power exported from India to Bangladesh. The two way trade stands at a remarkable $7 billion and is expected to reach $10 billion by 2018.

During Indian Prime Minister Narendra Modi’s visit to Bangladesh, over 22 agreements were signed alongside an extension from Reliance Power to invest over US$3 billion to set up a 3,000 MW LNG-based power plant. Additionally, to increase people-to-people interaction, both the countries resolved to ease visa regime providing 5 year multiple entry visas to minors below 13 and elderly above 65. Hence, Bangladesh has emerged as an important trading partner for India.

But Bangladesh faces no less hindrances in the path to progress. Over the years, Bangladesh has constantly battled against rising extremism, in particular Islamic extremism. With the advantage of technology accompanied by easy modes for spread of ideas such as social media platforms, the transnational Jihadist organizations readily taps into the domestic foray. Several home-grown extremist organizations- the likes of AQIS and Jaamat-ul Mujahedeen - have adopted both conventional and non-traditional mediums for spreading radicalism in Bangladesh. However, reiterated the speaker, Bangladesh, as a resilient society has staunchly rejected the idea of radicalization.

The state of Bangladesh has vociferously countered extremist fringes, as terror groups have aimed at exploiting existing fissures in the domestic realm. In the immediate past, political rivalries and social dissatisfaction has largely been unchecked providing fertile ground for an alternative narrative against democracy by Islamic extremists. Such narratives has largely captured the imagination of the younger generation-who have developed a profound disconnect from the indigenous cultural past. A transition alongside has been witnessed from usage of traditional to semi-automatic equipments, as also revealed in the Holy Artisan incident. Furthermore, an impetus to extremism in Bangladesh is provided by societal factors. Persisting poverty, looming socio-economic development, including in sectors of health, education and sanitation has immensely contributed to such activities. Hence, increasing number of young Bangladeshis have been disenchanted with their families, political establishment as well as the ill-grown civil society.

Nevertheless, Bangladesh has the capacity, or rather has developed a strength to absolve ruthless extremism. But cooperation and collaboration on counter-terrorism is of primary significance, especially with countries facing similar threats including in India and Myanmar. In the bilateral relation of India and Bangladesh, several strains leave dark marks, including the prolonging water disputes with India, case of ‘illegal’ migration, and border disputes amongst others. In the climate of growing aggression from China and an unpredictable United States, it is of urgent significance to India and the regional players to join hands in furthering inclusive development, as well as establishing peace and stability in the region.