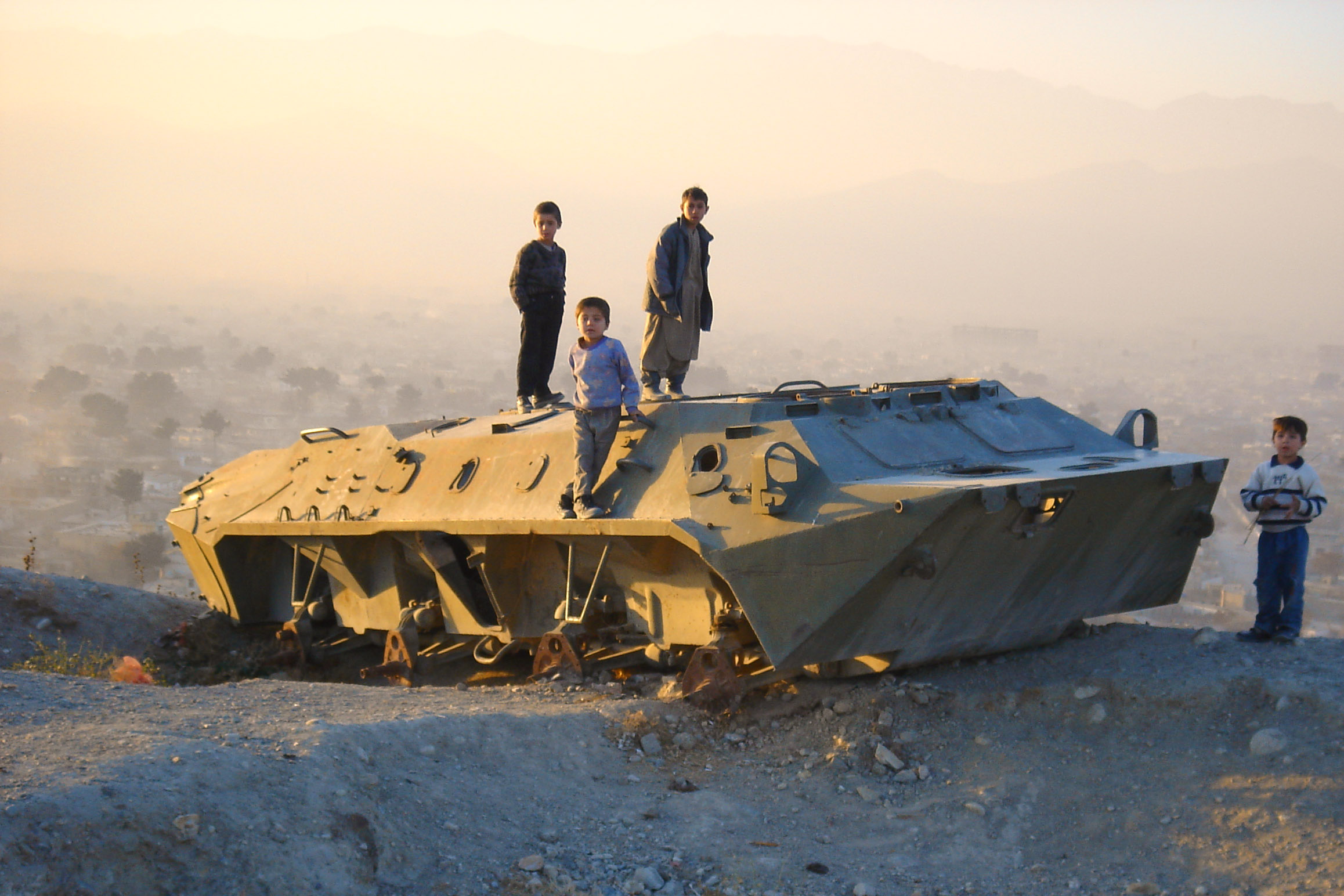 Afghan children playing with a tank destroyed outside Kabul.

In the recently concluded gruesome raid on the Afghan Army base on April 21, Taliban purported to have killed over 140 soldiers, mostly un-armed. The attack was undertaken when the soldiers were observing Friday prayers at the Camp Shaheen near Mazar-e Sharif. In an official statement by Gen John Nicholson, Commander of NATO Resolute Support Mission, stated ‘the attack on the 209th Corps shows the barbaric nature of the Taliban’.  It comes as a setback for the Afghan government and its coalition that has previously made significant efforts to initiate peace talks with the Taliban in Doha. Alongside, in the aftermath of the U.S strike of MOAB (GBU-43/B) in Afghanistan, slated to have killed over 95 militants, this strikes comes as a brutal rebuttal. According to the latest quarterly report of the special inspector general for Afghanistan reconstruction, between January 1 and November 12 last years, Afghan national security forces has lost almost 6.785 soldier to the ongoing conflict. As the most recent US military estimates states, there are between 600 and 800 ISIS-K fighters in Afghanistan, concentrated mostly in the Southern province of Nangarhar.

Reiterating Trump’s commitment to eradicating ISIS safe havens in Afghanistan, the US NSA McMaster on his first visit to Afghanistan stated ‘As a result of joint Afghan and international forces efforts, no safe havens will be left for terrorists in Afghanistan’.

The history of fighting between the Taliban and government forces in Afghanistan escalated majorly in 2015, with the Taliban seizing control over key areas such as Kunduz. In this scenario, the United Nations claimed almost half of the country’s province to be at high or extreme risk. Particularly after the death of Mullah Omar, the Taliban Chief, and perceptible signals of a staggered Taliban, it was impossible to attribute firm responsibility for many acts of violence. Alongside, this region also witnessed a profound rise in terror activities by the Islamic state.

In the subsequent years, the government efforts to tackle increasing militancy in the region has ratcheted up. The Afghan government was pushed to strong arm its military to tackle the ‘threats’ posed by the Taliban, al-Qaeda, ISIS affiliates by a UNSC resolution. In a recent UNSC meeting, this resolution has been extended until 17 March 2018. The UNSC on extending the deadline for the resolution expressed serious concerns over the escalating presence of Islamic State in Afghanistan. As progress in the multilateral front to conjure up support against ISIS was witnessed in the Moscow led multilateral talks in February, the focus was drifted on targeting the Islamic state, as the bigger evil. The participant countries including China, Pakistan, Russia, Iran, except Afghanistan and India expressed strong will in confronting the IS first. The latter two however, were inclined on addressing emerging security threats from Taliban in the region. In these multilateral talks, United States was amiss.

In the present scenario, the peace talks with Taliban from Russia as well as Afghanistan seems to have defeated its purpose entirely. Further, proving right India’s wariness over any sort of negotiation or accommodation of the Taliban demands in fighting with the ISIS. As it seems, the Taliban emerges as the ‘bigger evil’ in the Afghan conflict that multiple stakeholders need to cobble up their strength to hurl a strong fight against.

Afghanistan, over the years has evolved as a strategic hub that the regional players as well global actors including United States and Russia have found improbable to detach their attention from. As for India, a strong state in Afghanistan will serve to hold against the incessant sponsorship of terror activities by Pakistan, while the latter has opted for a client government in Kabul that serves its interest well. Islamabad has displayed greater worry for a rising Pashtun nationalism that could be detrimental to its interest invoking tension in the western areas. Precisely for this reason, Pakistan has aspired to dominate Afghanistan through stratagems like the ‘Strategic Depth’ since late 1970s.

On the other hand, United States has opted for a stable state however ironically the core reason for greater military inflation goes down to US and China’s financial and military aid to Taliban in the past decades. Making a revival to the war scenes, Russia aims to surge ahead as a major stakeholder in Afghanistan, amongst other thing, to bolster its strategic and politics aims. In the face of massive drawdown of its strength in the international arena, for Russia a safe bet to assert its diplomatic and to an extent military might come through Afghanistan. Iran, while battling with larger problems in its domestic arena, aims to see a stable Afghanistan and prevent to the best possible extent anti-Shia activity. Lastly, China with multifold aims aspires for security as well as an elevated status in the regional domain vis-à-vis India, through its continued engagement in the affairs of Afghanistan.

Asserting their individual aims as well as explicitly making efforts to enhance peacebuilding efforts, these actors have been indulged in the Afghan conflict scenario for an extensively long period. Alongside, an ongoing UN Peacekeeping mission has erected stronger grounds for its sustenance at least for a couple of more years, in Afghanistan. While much has been talked about and bolder actions have been charted out for Afghanistan, an inclusive conflict resolution has to build upon adherence to the universal laws of human rights as well as allow pertinent space for a ‘Afghan led and Afghan owned’ model of governance in the domestic ambit.